Before starting to test expert advisors, one has to perform the setup. This means that one has to:

To test and optimize experts, a special "Tester" window is used in the terminal. All above parameters are set in the "Settings" tab of this window.

An Expert Advisor and Its Parameters #

One has to select an expert to be tested in the "Tester – Expert Advisor" field. One cannot select any expert file in this field. Only those experts that are available in the client terminal can be selected here. To be selected, they must be compiled and located in the /EXPERTS folder.

After an expert has been selected, one has to perform additional setting of testing parameters and inputs. This can be done by pressing of the "Expert properties" button. 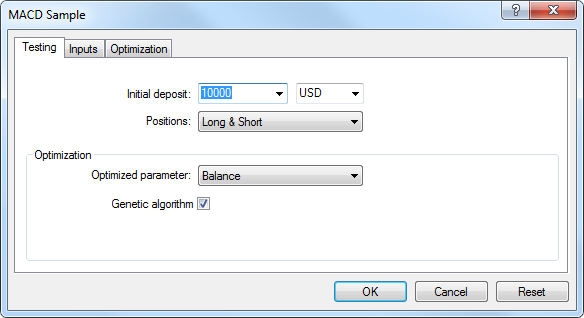 A new window with three tabs will appear then:

To start testing, it is not enough just to select an expert and set it up. One has to select a symbol and a period (timeframe) for testing. These are data that will be used for testing. At testing, one can select an available in terminal symbol or use an external data file. History data files of *.FXT format stored in the /TESTER directory are used in testing. These file are created automatically at testing if an available in the terminal symbol was selected.

The symbol is defined in the field of the same name, and timeframe is in the "Period" field. If no data file for this symbol, period and modeling method does not exist yet, it will be created automatically. If there are no history data for the symbol or period, the tester will download the last 512 history bars automatically.

Historical data are saved in the terminal only as bars and represent records appearing as TOHLCV (HST format). These data can be used for modeling of price changes at testing experts. In some cases, such information is not enough for testing. For example, for the daily timeframe, price changes within a bar can result in triggering of the expert. At the same time, no triggering can occur at testing. In other words, testing an expert based on only bars can be inaccurate and give a false idea about the expert efficiency.

One of three methods of historical data modeling can be chosen for testing:

The modeling quality can be checked in the "Report" window. The "Modeling quality" field and a colored band are intended for this. The band is a scheme of the modeling process. It can be of three colors:

The price history stored in the client terminal includes only Bid prices. On default, to model Ask prices, the strategy tester uses the current spread of a symbol at the beginning of testing. However a user can set a custom spread for testing in the "Spread" field.

If the ""Visualization"is flagged, after the "Start" button has been clicked, the chart will be opened automatically, on which the modeled tick sequence will be played. The playback speed can be regulated. The playback can be suspended by clicking the "||" button. The repeated click on this button resumes the income of the modeled ticks. Pressing of F12 causes immediate appearance of the next tick even in the suspension mode. Visualization can be skipped up to a certain date. After the desired date is set and the "Skip to" button is clicked, visualizing will stop and then resumed after the tester reaches the defined date.