In late October 2010, MQL5 Wizard was released as a new component of the MetaTrader 5 terminal. The wizard automatically generates the code of a trading robot. With MQL5 Wizard, knowledge of programming languages is no longer a prerequisite for creating trading robots - the application performs all the operations required for creating an Expert Advisor. 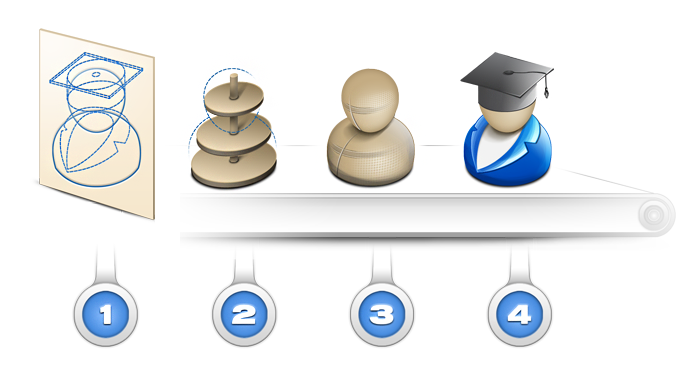 The program creates different EA modules to significantly simplify the robot development process. A user only has to set parameters and select the necessary components. MQL5 Wizard will do the rest.

MetaTrader 5 trading platform was released in 2010. Unlike MetaTrader 4, it allows trading both on Forex and the world stock exchanges.

Currently, this is the most powerful community of trading robot developers in the world providing a plethora of various services — social trading, market of trading applications, library of free MQL programs, Freelance service, blogs, articles and all necessary documentation.

In May 2009, we opened a new office in Sydney (Australia). The new office sells and supports all MetaQuotes products providing a complete service to customers from Asia-Pacific region.

In 2006, we have developed our first corporate management system (Groupware) for the needs of the company. Initially, the application was not for sale. It enabled us to establish effective interaction within the company and solve the issues caused by its rapid growth. Over time, we decided that such issues are typical of all companies, and groupware systems can be useful to them. Thus, the development of TeamWox commercial system started. Currently, it incorporates all our achievements and experience in the development and use of groupware systems. TeamWox is a simple, convenient and functional tool for managing a modern company.

In early 2009, TeamWox system made its debut on the market becoming available for sale. TeamWox basic version contains a free VOIP telephony, an electronic document flow, automated reports, a unified client base with sales funnel, the integration with company websites and a technical support module.

Over a period of 13 weeks (from October 1 to December 26, 2008), trading robots of the Championship participants competed for the grand prize - the title of the Best Expert Advisor of the Year and the prize fund of $80 000. The Championship gathered Expert Advisors with different trading strategies, algorithms and trading symbol sets. 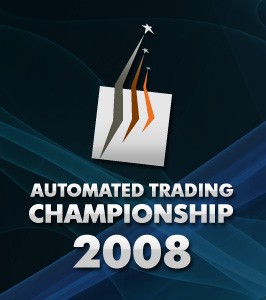 Thanks to the participants, we were able to enhance our understanding of the automated trading. For many participants, the competition was a good opportunity to test and evaluate their trading robots without interfering with their work.

Kiril Kartunov won the award for "The first place in the Automated Trading Championship 2008" and $40 000, while his trading robot was entitled the Best Expert Advisor of the Year.

In February 2008, a free manual on MQL4 programming was published with the support of MetaQuotes Software Corp. The book can be found on our website at https://book.mql4.com.

The publication is designed for a wide range of readers who want to develop their own automated trading programs for MetaTrader 4 platform. The book features new terms and can be of interest to experienced automated strategy developers as well.

Userguide for MetaTrader 4 Mobile for Smartphones

Userguide for MetaTrader 4 Mobile SE for Smartphones is released.

The new Userguide contains the full description of the features and functions of the mobile terminal for smartphones and consists of the following sections:
1. Getting Started: the terminal installation, account opening, authorization system, LiveUpdate system.
2. Terminal Settings: connection to the server and Data Center, notification of system events.
3. User Interface: menus and tabs of the program.
4. Analytics: description of technical indicators.
5. Trading: order types, execution modes and trade positions.

The development of the MetaTrader 4 Mobile SE has been completed. Using it, you can get access to financial markets and make trades worldwide. The embedded symbol charts and technical indicators, as well as financial news, will help to make a decision about whether to open or close a position. Trading via this terminal is fully confidential and absolutely safe. If it is necessary, you can find trading history in your MetaTrader 4 Mobile any time.

Having downloaded the MetaTrader 4 Mobile SE, you get:
- the full set of trade orders;
- symbol charts;
- Market Watch;
- history of trades;
- news in the mode;
- alerts;
- mailing system.

Official release of the MetaTrader 4 Mobile SE is planned for the 1st of June 2007. In addition to the functions already embedded in the terminal, the full version will also have technical indicators.

We resume the development of MetaTrader 4 Mobile Smartphone Edition (SE).

Let us remind you that MetaTrader 4 Mobile вЂ” a mobile terminal for PDA Pocket PC вЂ” is being used at the moment in MetaTrader 4 Platform. For it to operate, a PDA+mobile phone with GPRS or a communicator are usually utilized. As distinct from this one, the new product will not require a PDA or a communicator working directly from a mobile phone with MS Windows Mobile for Smartphones OS.

In 2006, rich functionality of MQL4 environment enabled the company to arrange the first annual Automated Trading Championship. Never before had the world seen a competition of Expert Advisors of such a scale. Trading robots of 258 developers competed for a prize fund of $80 000 in this 12-week contest. The winner Roman Zamozhnyy increased his deposit by 250% and received $40 000.

The Championship sparked interest among traders and brokers encouraging further development of the automated trading around the world.

The new terminal successfully combines great functionalities that allow effective trading with many accounts and with exceptional usability. The program interface is similar to that of the MetaTrader 4 Client Terminal. It is very simple, any trader using the MetaTrader 4 Client Terminal can easily get acquainted to this new program within a few minutes.

MetaTrader 4 Mobile Userguide has been released. 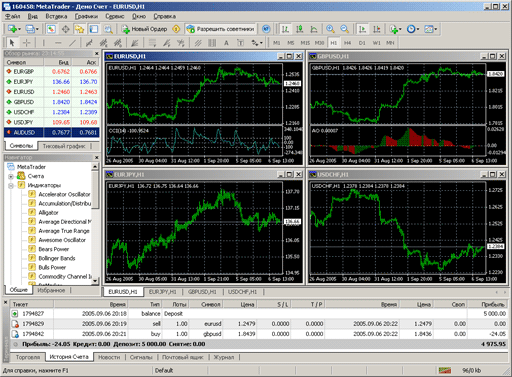 We are glad to inform that our latest development, online trading platform MetaTrader 4, has been released on July, 1. MetaTrader 4 is one of the best platforms in the world designed for organizing brokerage service on Forex and Futures.

This new system has been developed for almost one and a half of a year. Our complex has been largely changed during this time period following the dynamic environment of financial markets. Something had to be rejected, other new things were realized. In any case, these changes were imposed by the striving for making MetaTrader 4 even more perfect and convenient tool for financial markets.

Our clients — both brokers and traders — rendered invaluable assistance in the whole course of the developing period. We are happy to express our thanks to all those who supported us, made suggestions and generated ideas for improving of the new system. With your help, we managed to make MetaTrader 4 even better. Thank you very much!

On the 1st of July, MetaTrader 4 will be released

On the 1st of July, 2005, our new Forex trading system MetaTrader 4 will be released officially. The software complex will go on sale and a free new version of the client terminal (part of the complex) will appear on our website on the first day of the month.

MetaTrader 4 is a complete solution designed to provide brokerage services at Forex and Futures markets. It includes both client terminal to be installed on the trader's computer and back office components to process trading operations on the broker's side.

MetaTrader 4 is the fourth version of Forex trading platform developed by our company. The new system is 3 to 5 times more productive than its predecessor. Reliability, security, ability to efficiently resist net attacks are absolute advantages of the new system.

More than one and a half year was taken by the developing on this new system. In this process, the developers cooperated closely with many brokerage companies and banks from all over the world. The most of them, considering the new system for more suitable, declared their upgrading for MetaTrader 4 even before it had been completed.

«Almost a year has passed since the first mention of the new system up to the beta-version release», said CEO of MetaQuotes Software, Renat Fatkhullin. «Now, after seven more months of testing, we can finally say: We did it!»

On December 15, we launched the MQL4.com website — a community for the users of the new MetaTrader 4 platform, which is scheduled to be released in summer 2005.

In addition to a forum, the site will feature educational materials related to trading and programming in the MQL4 language, as well as various services to enhance the functionality of the new trading platform. Read articles, discuss the functions of MetaTrader 4, and share your experience with fellow traders — welcome to the new community website!

Release of the First Mobile Terminals

The first mobile terminals for Forex trading (MetaTrader 3 CE and MetaTrader for Palm) were released in 2003.

The terminals were quickly appreciated by users expanding the company's customer base and boosting MetaTrader's popularity in the world.